Home » GOVERNMENT YOJANA » Changes in the rules: From April 1, these 10 rules, including tax on PF and banking, will be changed, it will have a direct effect on you.

Changes in the rules: From April 1, these 10 rules, including tax on PF and banking, will be changed, it will have a direct effect on you.

Changes in the rules: From April 1, these 10 rules, including tax on PF and banking, will be changed, it will have a direct effect on you.

March 31 is the last day of the financial year. Then the new financial year will start from April 1. Many of the rules will change as the new financial year begins. We are telling you about 10 such changes.1. Tax on interest received from EPFIn Budget 2021-22, the tax on interest received from the Employees Provident Fund (EPF) was announced. Now investing up to Rs 2.5 lakh in EPF in a financial year will be tax free. If you invest more than that, the income from interest on the additional amount will be taxed. This means that if you have deposited Rs 3 lakh per annum, the income from interest on Rs 50,000 will be taxed at the rate of your tax slab.2. Changes in celery related rulesThe new Wage Code of Celery is set to take effect from 1 April. Your salary will change as soon as the new wage rule applies. According to the new wage code, the share of salary in the salary you get on hand should be 50%. This means that the total salary you get as basic salary, inflation allowance and retaining allowance should be half of your total salary. This means that the structure of your celery will change from the 1st date.3. There will be a charge for withdrawing and depositing money from the post office accountIf your account is with India Post Payment Bank (IPPB), you will have to pay a charge on Aadhaar Based Payment System (AEPS) from April 1, 2021 except for depositing or withdrawing money. This charge will be levied after the limit of free transaction is met. So if your transaction limit is met, this charge has to be paid.4. Pre-field ITR formFor the convenience of the employee and to facilitate the process of filing income tax return, pre-field ITR form will now be made available to individual taxpayers from 1 April 2021. This will make it easier to file an ITR.5. Exemption of Super Senior Citizens from filing ITRFrom 1 April 2021, senior citizens over the age of 75 will not have to file an ITR. This exemption is given to senior citizens who are dependent on pension or interest earned on a fixed deposit.

6. Double TDS on not filing ITRThe government has tightened the rules for those who do not file ITR. For this, the government has added section 206AB in the Income Tax Act. Under this, if you do not file ITR now, you will have to pay double TDS from April 1, 2021. Under the new rules, those who have not filed an income tax return will also be charged a higher tax collection at source (TCS). According to the new rules, from 1 July 2021 the penal TDS and TCL rates will be 10-20% which is usually 5-10%.7. The car must have dual airbagsSafety standards in passenger cars are changing from April 1 next month. Airbags are now mandatory for the driver as well as the side seat.8. People over the age of 45 will get the corona vaccineFrom April 1, all people aged 45 and over will be vaccinated against coronavirus. All they have to do is register on the Covin portal. They will then be able to go to a government or private center to get the vaccine.9. The checkbook and IFSC of Oriental and United Bank will be changedAccording to Punjab National Bank, the old checkbook and IFSC / MICR code of Oriental Bank of Course and United Bank of India will only work till March 31. Then you have to get a new code and checkbook from the bank. Customers can also call the toll free number 18001802222/18001032222 for more information. On April 1, 2020, the government merged Punjab National Bank, Oriental Bank of Course and United Bank of India.10. Non-salaried class will have to pay extra TDSFrom April 1, non-salaried class people such as freelancers, technical supporters, etc. will have to pay extra tax on their pockets. At present such people had to pay 7.5% of their income as TDS but now they have to pay 10% TDS. 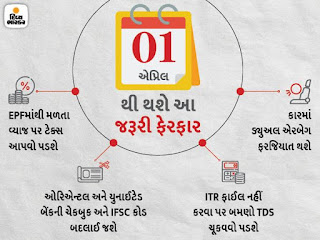 0 Comments for "Changes in the rules: From April 1, these 10 rules, including tax on PF and banking, will be changed, it will have a direct effect on you."