Home » Tech Tips » Useful Tech Tips: Here are 10 reasons why the phone slows down or hangs

Useful Tech Tips: Here are 10 reasons why the phone slows down or hangs

Useful Tech Tips: Here are 10 reasons why the phone slows down or hangs, here are some tips to avoid it.

: There are many smartphones available in the Indian market that do not hang or slow down. Older smartphones tend to have a hang problem. Older smartphones give a late response. In this condition the phone has to be restarted frequently. However, the reason why the phone slows down is not because it is getting old but because of some errors made by the user with the hardware specification and software of the phone. Let's find out what these mistakes are and what should be done to avoid them ...

Smartphones with up to 12GB of RAM are now available in the market. Smartphones do not hang in multitasking if the RAM is high. 3 to 4 year old phones have 1GB or 2GB of RAM. So the phone's storage starts to get full or it gets slower than multitasking.What to do: Phones that have less RAM should have less data. Only install working apps in such phones. Don't install apps with too much space.

This bug also slows down the smartphone. When the apps are opened in the smartphone, the user starts to do other work by backing it up. The user feels that the app may be closed. However it is minimized and stays open in the background. This means that these apps consume everything from battery to RAM. This causes the phone to slow down.What to do: Properly close any app when you use it. For that, tap END KEY and close.3. Updating apps If your phone has 521MB / 1GB RAM and 4GB / 8GB storage, don't update apps frequently. The phone's internal memory is different for operating system apps. This means that the user never gets enough internal memory. So it takes up more memory and space when updating the app.What to do: Update only apps that are used regularly. Keep auto update off in play store.

4. Not to clear the cache

Cache may not be known to users. Temporary data is stored when we use an app. It's called Cache. This data consumes the RAM of the phone. So it needs to be cleared.What to do: Go to apps in phone settings. The app will have the option of Clear Cache and Clear Data. Clear Cache from it.

6. Use of antivirus or cleaner app

8. Always keep the phone on

A phone that is always on, meaning it has not been switched off for a long time, also has a problem of hanging and slowing down. With the phone constantly on, the cache file also grows along with the temporary file. If this number is increased, it slows down the phone.What to do: Turn off the phone for 15 minutes in 1 week. If possible, remove the phone's battery and memory card at this time. Doing so auto-closes all temporary files.

The phone takes up the most space video. Movie and video song should be deleted once viewed. Also small videos on WhatsApp take up a lot of space in the phone.What to do: Keep audio and video work files. Take a look at the video, audio and GIF file on WhatsApp and delete it.

Your WhatsApp comes with a number of files including GIF, PDF, Contacts, Audio along with photos and videos. Most users do not delete it by watching or listening to it. The more times this content is forwarded the more space it takes up. This means that the memory of the phone is consumed. Phones also slow down due to long conversions in WhatsApp.What to do: Go to WhatsApp Media Folder and delete the files that are not working for you. Also delete media files. Also keep deleting causeless messages without group. 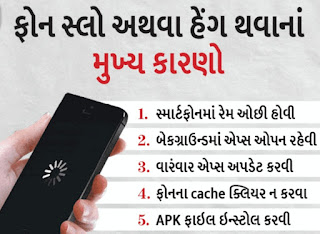 0 Comments for "Useful Tech Tips: Here are 10 reasons why the phone slows down or hangs"