Gujarat election results 2022: Key constituencies to watch out for

While Gujarat has been a BJP-ruled state, the major contest in Gujarat elections is between BJP and Congress and Aam Aadmi Party (AAP) political parties

The Gujarat Assembly elections' results for 182 seats will be announced on December 8. Voter turnout stood at 64.33 per cent in the recently concluded elections which were held in two phases on December 1 and 5 across 33 districts. While Gujarat has been a BJP-ruled state, the major contest in Gujarat elections is between BJP and Congress and Aam Aadmi Party (AAP) political parties.

The BJP dropped the sitting MLA Dharmendrasinh Merubha who won the seat by defeating Congress in the 2017 Assembly elections. The seat came to the limelight after a political tussle between two members of the same family came to the fore with Rivaba, who is making her electoral debut.

The AAP's chief ministerial candidate Isudan Gadhvi is contesting from the Khambalia seat. He is contesting against BJP's Mulu Ayar Bera and Congress' Vikram Madam.

The BJP has fielded Bhagwan Barad from the seat contesting against AAP's Devendra Solanki and Congress' Mansinh Dodiya. Barad won the seat in the 2017 Assembly polls. He had resigned as the Congress MLA from Talala Gir Somnath district and had joined the BJP following which he was given a ticket from the same seat. Barad is an influential leader of the Ahir community. He won from the Talala constituency in 2007 and 2017.Katargam (Surat)

Kandhalbhai Jadeja, son of late don Santokben Sarmanbhai Jadeja, is contesting on the Samajwadi Party ticket. He had won the 2017 Assembly elections on the NCP ticket, however, he quit the party recently after he was denied a ticket. He is contesting against BJP's Dheliben Odedra, AAP's Bhimabhai Makvana, and Congress' Nathabhai Odedra.

Viramgam is also considered to be an important constituency where Patidar leader Hardik Patel contested as a BJP candidate,Lakhabhai Bharwad is the Congress candidate and Kunvarji Thakor is the AAP candidate.

The results of the Gujarat Assembly polls will be announced on December 8.

(with inputs from ANI)


Nature of the client 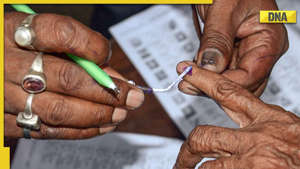 The BJP is eyeing a record seventh straight term in Gujarat and also hoping to buck the anti-incumbency trend in Himachal Pradesh witnessed for nearly four decades as the stage is set for counting of votes on Thursday for the Assembly elections in the two states.

Simultaneously, votes polled in by-elections in six assembly constituencies in five states and the high-profile Mainpuri Lok Sabha seat in Uttar Pradesh, where the opposition Samajwadi Party is locked in a battle for prestige with the BJP, will be also counted. The counting process will commence at 8 am with postal ballots to be taken up first.

Exit polls have predicted a big majority for the Bharatiya Janata Party(BJP) in Gujarat and if these projections are any indication the saffron party is all set to retain power in the home state of Prime Minister Narendra Modi and Home Minister Amit Shah for the seventh consecutive term and equal Left Front's feat in West Bengal. The CPI(M)-led Front ruled the eastern state for 34 years from 1977 to 2011.

The BJP, which won 99 seats in the 2017 polls, is projected to win in the range of 117-151 seats in a House of 182 and the Congress between 16 and 51 seats. It is also upbeat about the possibility of the AAP eating into Congress votes, which could be additionally beneficial for the saffron party. The best showing for the BJP in Gujarat came in 2002 when the party had won 127 seats in the 182-member state assembly.

The poll outcome will determine if the Aam Aadmi Party(AAP) gets a chance to establish itself as a pan-national party and a challenger to the BJP at the national level also.

The AAP, which is in power in Delhi and Punjab and had launched an aggressive campaign to make it a three-cornered contest for the first time in Gujarat, was projected to bag anything between 2 and 13 seats. The majority mark is 92.

For the Congress, its role as the main challenger to the BJP is at stake and Thursday's results will show if the party's ?silent campaign' has cut ice with people. Top leaders of the party, which was projected to bag between 16 and 51 seats, were busy with Rahul Gandhi's Bharat Jodo Yatra. The Congress bagged 77 seats in 2017.

Congress holds power only in Rajasthan and Chhattisgarh, both of which will go to polls in 2023, and party insiders say that any hopes for the party's revival has to start from Himachal Pradesh. It is expecting the electorate to go by the nearly four-decade old tradition of voting out the incumbent government in the hill state.

As the BJP battled anti-incumbency sentiments after 27 years of rule in Gujarat, Prime Minister Modi was the party's trump card and the ruling party banked on 'Brand Modi' in a bid to contain the anti-incumbency factor.

Among the key issues in Gujarat campaign were unemployment, price rise, water not reaching certain pockets of the state, land acquisition for big projects and farmers not getting proper compensation for crop damage due to excess rains.

While Modi led the BJP poll campaign holding several rallies and mega road shows in Gujarat, Home Minister Shah was in the state for almost two months, micromanaging the campaign and the election strategy.

In Himachal Pradesh, it could be the Congress' turn to form the next government if one went by the state's "riwaaj(tradition) and long history of voting out the incumbent government.

But with all but two exit polls predicting an edge for the ruling BJP it remains to be seen which way the voters have decided in the closely fought elections.

The hill state has not returned any incumbent government to power after 1985, a trend the ruling BJP, powered by Prime Minister Modi's personalised campaign, hopes to break. The BJP slogan this time was "Raj nahin, riwaaj badlega", meaning the convention will change, not the government.

The BJP has bucked the anti-incumbency trend in the last Assembly polls in Uttar Pradesh, Goa, Assam, and Uttarakhand by repeating its state governments there, and is hoping to repeat its government in Himachal Pradesh, which is also the home state of Nadda. It is hoping for an encore on the back of its development agenda.

In the 2017 assembly elections in Himachal Pradesh with a house strength of 68, the BJP had won 44 seats and the Congress 21, with one seat going to the CPI-M, and two to independent candidates.

The Congress has been confident of its victory, saying the voters will decide on the fundamental issues of price rise, joblessness, the old pension scheme, and other challenges of life and livelihood the state residents have been facing.

With a muted campaign by the AAP and its former state in-charge Satyendar Jain lodged in Tihar jail, the Congress is upbeat that its vote share will only improve, while the BJP hopes to gain from a higher women vote percentage than men.

A higher women turnout has of late favoured the BJP, as seen in UP and Uttarakhand, with the party hoping that similar trends will hold in HP.

Both the BJP and Congress camps are learnt to have been in touch with independent candidates who might play a key role in the event of a close contest, predicted in several exit polls, with a slender edge to the BJP.

The BJP is set to return to power in Gujarat with a huge margin in terms of seat numbers, according to trends in the exit poll results. Zee News exit poll suggests the BJP could win between 110 and 125 seats in the 182-seat Gujarat assembly. The BJP has been in power in Gujarat since 1995. In the 2017 elections, the Congress threw a strong fight towards the saffron camp. But, this time they may lag behind in terms of number of seats. Acoording to the latest trends, the 'Modi Magic' will continue in Gujarat.

Political analysts feel that the main reason for this surprising result for the BJP is the presence of the Aam Aadmi Party. According to the exit poll results, AAP is not expected to get many seats. Most surveys say they can get single digit seats. But, the opposition vote is divided between them. Many considered Arvind Kejriwal to be a suitable alternative to the Congress. And this is one of the reasons for increasing the BJP's number of seats in Gujarat. However, the vote percentage is likely to decrease. This is not good news for the BJP if we look at 2024.

Also, political analysts feel that there was a lack of campaigning on the part of the Congress in the Gujarat elections. Which ultimately went in favor of the BJP. Many central BJP leaders, including Narendra Modi, Amit Shah held meetings and roadshows in Gujarat one after the other. Arvind Kejriwal, Manish Sisodia, Bhagwant Singh Mann have repeatedly come to Gujarat to campaign for the Aam Aadmi Party. Congress has not been seen campaigning in Gujarat in the same manner as others campaigned in Gujarat. New Congress president Mallikarjun Kharge held several meetings in Kharg, but the Gandhis seem to have avoided Gujarat. Rahul Gandhi has been busy with the 'Bharat Jodo Yatra', spending only two days campaigning in Gujarat. Sonia and Priyanka Gandhi were not seen.

However, all the boxes will open tomorrow from 8 AM onwards. In order to find out the full list of winning candidates' names, check the latest updates below. Currently, the Bharatiya Janata Party is in government in Gujarat. Here you can see all the information about which party gets how many seats in Gujarat Chunav Results in 2022 out of 182 assembly constituencies. Also, the complete details of which MLAs have been elected from which constituencies can also be seen on the page below.